How I Got My Nickname 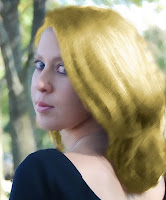 I suppose there isn't only one incident that earned me the name "Madman" from my brothers. They never did understand me, or what made me do the things that they, in their shallowness, labeled insane. I did occasionally bite them when we were little, but plenty of kids are biters. We all grow out of it.
When I was a teenager my brothers deemed my hormones a cause of madness, though I'd like to point out that they sketched nipples on every woman in their comic books until they were about eighteen, and they never saw that as an oddity, or a suggestion of hormonal imbalance. Granted, I did my share of crying and screaming and slamming doors at the appropriately dramatic times. But that, too, is normal, is it not? Not mad. Not behavior that would get me locked in Mr. Rochester's attic.
If you talk to Gerhard, which you shouldn't, he will tell you that I once followed my science teacher home. Gerhard thought I was stalking him, when in fact I simply wanted to see where he lived because he had often mentioned the beauty of his neighborhood. I like to think this was the reporter in me, emerging even at the age of sixteen. But then my car stalled outside my science teacher's house; not wanting to be seen, I crouched down in the passenger footwell and called Gerhard on my mother's cell phone, begging him to come and get me, and I was still there twenty minutes later when my brother peered through the window, his face a study in disbelief. I would have defended myself more thoroughly at the time, except that my legs were entirely asleep, and I lay in the back seat, crying gently, embarrassed and in pain. Naturally my older brother chose to interpret this whole affair, what I call the "Mr. Bentley Affair," in the worst possible light.
If you talk to Fritz he will tell you that I sing to myself, or that I used to make paper dolls of people I knew and hang them up in my room. Fritz calls them voodoo dolls, but no pins were involved. My mother insists that this was an early blossoming of a highly creative mind, and I'm obliged to agree. I have a highly creative mind, not a mad one.
The fact is, my brothers get upset because my job, every now and then, has a wee element of danger, and they don't think that I can handle danger--or anything--very well. And about that they are, of course, wrong. Sooner or later they'll come around, but I can't worry about what Fritz and Gerhard think. I'm a grown woman. I'm a professional. And I am most certainly not mad.
Posted by Maddy at 8:16 PM

Labels: madness as opposed to eccentricity

Maddy
I am an award-winning reporter for the Webley WIRE, a weekly in the small town of Webley, Illinois. I have a boyfriend named Jack, two brothers named Fritz and Gerhard, and two parents, and they all tend to disapprove of my choices; this is why I earned the nickname "Madman" at a young age, and somehow I've never outgrown it.